“Does the kid have ID?” smirks a kind-faced older man.

I’m sipping a crisp, citrusy white wine while holding my two-week-old daughter in my arms. “She won’t be drinking this evening,” I chuckle back.

The man—Chuck Formoso—is one of the owners of Ristorante Lucano. He and his wife, JoAnn, opened the restaurant more than two decades ago.

So many friends have gushed about how

much they love Lucano. The space’s unassuming location in a little plaza on East Avenue has always puzzled me. Could one of the warmest restaurants in Rochester really be located in a strip mall?

I’ll admit I had a lot of anxiety about writing this column. I wasn’t sure how my first dining experience post-baby was going to go. Eating out has always been a big part of my life: how I celebrate, treat myself, and reset. Being that person with the screaming kid at the restaurant terrified me.

The staff at Ristorante Lucano eased any of those worries. They treated my husband and me like VIPs rather than sleep-deprived new parents trying to slip by unnoticed.

It all started when I sheepishly called to make the reservation. I got the first dinner service slot—5 p.m.—and let the woman on the other end know we’d be bringing a little one. “Not a problem,” she said, unfazed. “We’ll see you then.”

We pulled up the following Friday, car seat in hand, and I didn’t even have to give my name. We were shown to our table in the Pottery Room, one of three dining rooms covered in detailed murals. Unsurprisingly, we were the first guests there—a perk of coming right at opening.

Pretty much the entire wait staff came by to say hello and catch a glimpse of our babe. Along the way, they’d refill our water glasses, top off our wine, and replenish our bread with the shiny brioche-like rolls I liked. It was awesome.

My first order of business was wine. As a new mom, I hadn’t touched the stuff in what felt like a year.The wine list was extensive, with many unique Italian varietals hand-selected by Chuck. “I prefer sticking with the small guys,” he said.

I landed on a Gavi from Piedmont.

I’m not sure I’d ever seen a bottle of the easy-drinking white outside of a wine shop, and it was delicious.

Our server rattled off no less than seven specials for the evening, ranging from an exotic-sounding fish prepared Adriatic-style to crispy fritto misto. With just the two of us, I didn’t know how we could choose.

“I work at another restaurant, and their calamari doesn’t touch this calamari,” our server said. That sealed the deal. Fritto misto it is.

Apart from the specials, the menu is extensive without feeling like an over-stuffed diner menu. It’s composed of appetizers, soups and salads, and pasta. In the main courses (secondi piatti) you’ll find novel Italian-inspired dishes like veal medallions in creamy cognac sauce ($28) and beef tenderloin served with caramelized onions on a bed of spinach ($39).

Unlike some red sauce joints in town, you won’t see the usual spaghetti and meatballs or eggplant parm here. The specialness of it all—imported orecchiette from Italy in fresh fava bean puree ($25) and wide pappardelle with eggplant and homemade sausage ($23)—made me want to order one of everything. Note for next time: Come with a group so we can get more dishes to share.

In the end, we kept it pretty simple.We ordered an appetizer, a pasta dish, and two entrees.

We made it to the first course, the fritto misto ($17), when I became “one of those people.” My daughter started fussing, and I needed to pull her out of her car seat. I looked apologeti- cally at the other diners and our server. Instead of shame, she met me with compassion.“Would you like me to hold her while you enjoy a few bites?” she offered.

I nearly cried. Luckily, the baby settled down while I navigated eating one-handed.

The misto was a generous portion of lightly breaded calamari (rings and tentacles) and shrimp dusted with herbs. These guys put standard fried calamari to shame. The coating was so impossibly delicate and perfect that it didn’t separate from the seafood. “It’s an ancient Chinese secret,” the waitress laughed when I asked her how the chef does it. 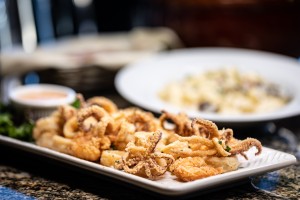 Next was the gnocchi alla panna ($23), pillows of potato pasta blanketed in a light cream sauce. Maybe this was my mom brain settling in, but it ate like a sophisticated mac and cheese. The peas and mushrooms added mouthfuls of texture and freshness that often gets overlooked in creamy pasta dishes, and the sauce wasn’t the least bit heavy.

When our entrees promptly arrived, the baby was sleeping and, at last, an agreeable dining companion. This was great news because we ordered the rack of lamb or (agnello scottadita) ($39), and I needed my other hand to use the steak knife.

The eight juicy frenched lamb ribs arrived grilled and coated in a slightly sweet wine reduction. The name scottadita roughly translates to “finger-burning,” and I could see why. After cutting the plump pieces of meat off the bone, I couldn’t help but pick the ribs clean, eating the rest of it with my hands.

The swordfish in ramp and butter sauce ($39), one of the fish specials, was so tender that I hardly used my knife. I’m used to thick steaks that are the consistency of pork chops. In comparison, these were velvety medallions. 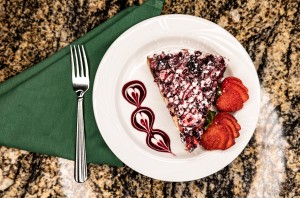 When it came time for dessert, I could hardly believe my luck. My husband and I had enjoyed a few glasses of wine and a multicourse meal largely uninterrupted. We ordered the fruit tart ($9) and a glass of Amaro Lucano to close our evening. Naively, I assumed it was a house digestif. “In Italy, they call this the best one,” Chuck said. He and JoAnn named their restaurant for the beloved spirit all those years ago.

Maybe because we had taken an interest in the amaro selection, he shared another favorite, Santa Maria, along with some encouragement. “Keep doing this,” Chuck said, referring to bringing kids to restaurants. He felt more like a friendly neighbor than a restaurant owner. “We did it with ours, and it makes it so much easier later.” I’ve received a lot of unsolicited parenting advice lately, but this landed differently.

“We plan to,” I replied, and deeply inhaled the syrupy aroma of the amaro.