“If you can perceive and believe your dream, you will achieve”

When I visited community activist Midge Thomas in her downtown Rochester home, I was unprepared for how overwhelmed I’d feel by the number of successful initiatives, boards, and organizations she’s spearheaded in her lifetime. At ninety-five years old, Thomas’s entryway is lined with her awards and framed accomplishments from over the years, including her induction into the National Women’s Hall of Fame and her National Jefferson Award.

Among her many accomplishments, she’s also the founder of the Freddie Thomas Foundation in honor of her late husband, the civil rights activist Dr. Freddie Thomas. I was humbled listening to her recount her many projects from over the years and how she’s positively impacted the Rochester community.

How long have you lived in Rochester?

I was born here, at Rochester General Hospital but I was raised in Mumford, a few blocks away from the Genesee Country Museum. I got married and moved to Rochester in 1957.

What gave you the idea to establish the Freddie Thomas Foundation, in honor of your late husband?

After my husband departed [in 1974], I wanted to do a humanitarian project in memory of him because of how much he loved the community. The building across the street [from our home] was for sale, and Freddie had said at one time that he wanted to buy it and use it to benefit the community.

After he died, the for-sale sign was still there, and one of my friends was the realtor, which made everything fall into place—this was one of Freddie’s wishes. The building was originally a Jewish Community Center, and they wanted to keep it as a community service building rather than a business. They were in favor of us using it for the foundation.

There was a school named after your husband, Dr. Freddie Thomas High School. Were you involved with the school at all?

Every year I had motivational speakers in our community that went and talked to the students to get them interested in their education. These speakers talked about how they knew Dr. Thomas and why the school is named after him.

In 1987 you raised money to purchase the Jane Pittman Drinking Fountain, a signature landmark in downtown Rochester. What gave you this idea?

I was sick with the flu, so I went to the pharmacy to get some medication. I was so sick that although I was only three blocks away, I needed to take the medication before I got home. I asked for some water at a nearby restaurant and the waitress charged me ten cents. I told her that water is free, but the waitress said she was charging me for the cup. After I paid, I thought two things. One, this was a prejudice situation, and two, there should be somewhere downtown where an ill person should be allowed water. I wanted to do something so that the next person who had this need would not have to go through what I went through.

I decided to go to the downtown development corporation and the City of Rochester Environmental Department and talk to them about giving the city a public drinking fountain so that water would be available for everyone. 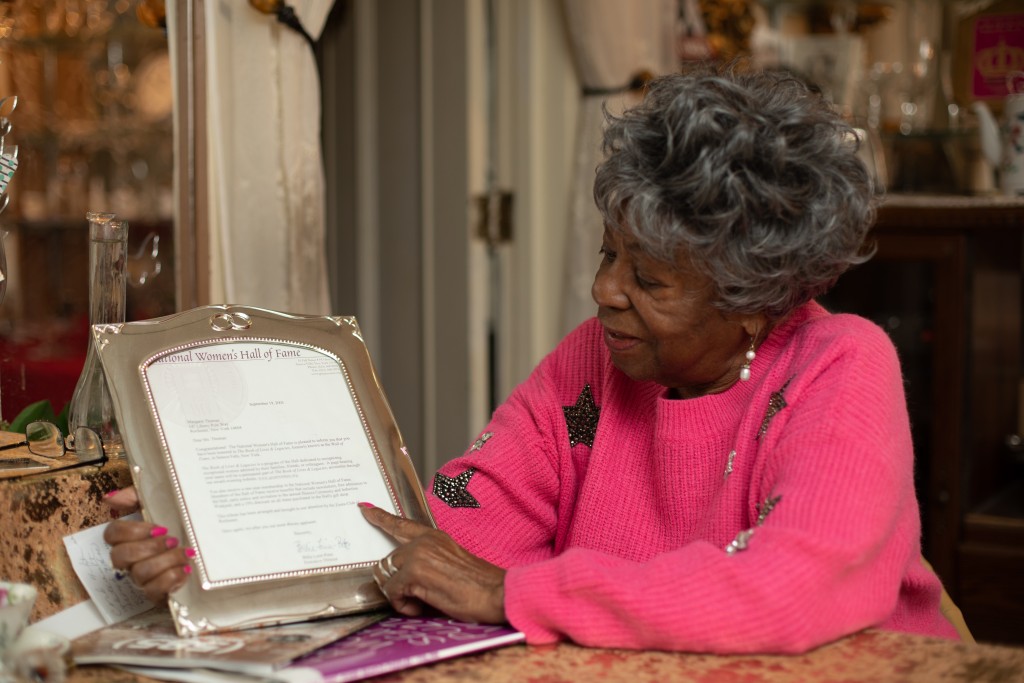 You host a series of jazz concerts outside of your home throughout the year. How do you know the musicians?

I just know them! There’s a group of musicians that meet at Ellwanger Estate. They are experienced, seasoned musicians that meet once a month to jam. I asked, and they came here and played. People passing by were putting money on a table [for them], so I put a bowl there to collect the money. We give the money to a program to buy instruments for young people. The musicians play for free, but it benefits the younger people who are talented in music and might not be able to afford their own instruments.

I even have a group of Eastman jazz students who play here, too. People come and sit around, have refreshments, and listen to music. The next concert will be in the spring.

Tell me about Dance Lovers, your series of ballroom dance parties.

For twelve years we hosted ballroom dance parties for people who took ballroom dance lessons but didn’t have anywhere to dance. The ladies had to wear after-five fashion, and me had to wear a tie and a jacket … when the ladies dress up, they don’t want their partner wearing jeans!

We had hosts and hostesses who knew how to dance, a DJ who knew ballroom dance music, and we served refreshments. It all started here across the street at the Lutheran Church.That was our first event, and 200 people came!

The Midge Thomas We Care Room was recently created and dedicated to you. Tell me about that.The young man who built the Skate Luvers Roller Palace (1684 Adirondack St., Rochester) approached me and said,“Mrs.Thomas, before you die, I want to give you a room that you can use for whatever you want to do.” So, we created the “Midge Thomas We Care” room. It’s free for people in the community to use. The room was just renovated: it’s carpeted; it has a television, fireplace, refrigerator … it’s a room that any nonprofit organization can use at no cost.

What’s your advice for someone who wants to help their community but doesn’t know where to start?

Midge Thomas is committed to the Rochester community and inspiring others. If you have an idea you’d like to discuss with her, email her at midge.thomas@frontier.com.